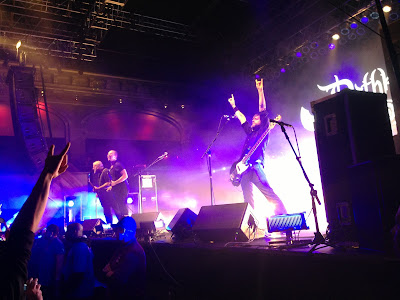 It's been a little over a week since the last Dethklok show, and I'm still reeling a bit from all the fun I had.  Our final show of the tour in NYC (after being rescheduled due to hurricane Sandy) was one of those moments where everything came together for me.  The combination of the amazing music, the enormous amount of admiration and respect I have for the band members, the mind blowing spectacle of the video/light production, and the unbelievable fervor of the crowd made that night one of my favorite musical moments ever.  It also didn't hurt that it was at Roseland, where I saw my first club show ever back in 1993.
I keep saying that this tour felt nothing like work and more like a vacation, and that's due largely to the amazing crew that was taking care of us.  Just getting to live on a bus with Brendon Small, Mike Keneally, and Gene Hoglan was such a pleasure.  Not only are they all masters of their instruments, but they're all huge fans of music of all genres, not just metal.
I have to admit that when I left ZPZ a year ago I was a little afraid I might never get to tour again, but even just subbing for Bryan Beller on this tour was such an awesome and positive experience that I'm excited to see where this crazy music business takes me next!
Posted by Pete at 5:25 PM

hon, it was an honor to hear you! I was a Roseland. Wish I had a chance to meet you. But I only to see Gene again. Was too tired, sore, and cold to hang much past 12:30 AM.

Hope you get to tour with them again! Not that I don't want to see Bryan again, just if he wanders off again....;-)